Inspiring Performance was appointed by a leading UK bank to provide an innovative approach to developing 600 high street branch managers.

The required programme would be engaging and developmental while addressing two specific business needs:

•     to be more responsive to the needs of their customers

•     to increase the revenue of the branches

It was recognised that branch managers needed to become business leaders; focused on excellence and with an ability to inspire and motivate their teams.   Wishing to establish a new ‘gold’ standard for development, the Bank gave the programme the support needed to ensure success.

Key objectives of the initiative were to re-engage, re-vitalise, re-skill and re-motivate the branch managers, while being sensitive to the conditions in which they were currently working.

Phase 1 – An innovative approach underpinned by the principle of ‘Five Senses’* and the philosophy of ‘Winning by Inches’.

Using actor-facilitators, the programme was designed around a storyline that reflected the complexities and challenges of the client’s own business.

During a 3-day workshop, the story unfolded with a series of short performances that inspired discussion among delegates about the attitude, behaviour and language of the characters within each interaction and the impact on the business situation – positive and negative. 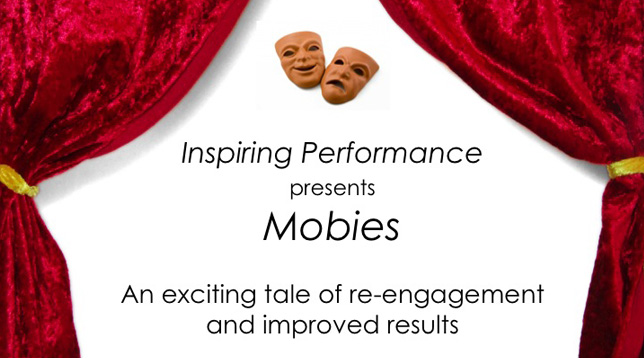 Learning from these debates, combined with their own personal experience and theoretical input from IP consultants, gave delegates the confidence to test their own methods and styles in a non-threatening environment. Delegates were able to practise the art of feedback and coaching, sharing their own thoughts with each of the characters, who in turn re-enacted the scene to create a more positive outcome.

The overall approach of learning through observation, input and practical hands-on coaching proved to be highly memorable and hugely effective. Delegates were fully engaged in the process and able to identify for themselves what worked and didn’t work and understand the reasons why.

Through this methodology, delegates were able to see how many small actions (‘the inches’) can add up to unexpectedly big wins.

Phase 2 – An opportunity for delegates to share ‘the inches’ they had gained in the workplace; embed the principles of the ‘Five Senses’ and develop networks to support and inspire one another going forward.

A panel of ‘experts’ with differing backgrounds: international business, competitive sport and military service joined the delegates for this workshop. They gave guidance and direction to the delegates as they worked on ‘real’ workplace issues (such as preparing for a new branch opening), before taking questions from the ‘audience’ on all aspects of leadership.

Inspirational speakers from differing arenas supported both parts of this programme, delivering their own unique and inspiring stories of leading others and ‘Winning by Inches’.

Within three months of the completion of phase 1, the client reported a 10-15% uplift in revenue in those branches where the branch manager had attended the programme.

Branch managers reported immediate and sustainable changes in their own behaviour and changes in the way their team responded to their renewed leadership. The following comments give a flavour of the impact this programme has had on the delegates and their branch teams.

“My team is a high performance team. My fear has always been ‘can I sustain it?’ This programme gives me the belief that I can.”

“Professional actors were used which was a master stroke – bringing to life the learning in a much more powerful way than normal role plays.”

“I am convinced that for both me and my team, performance will increase significantly.”

“I have been on many courses in and out of the bank. This has been the most inspiring, developing and enjoyable course yet. Thank you all very much – you have made a huge contribution to my life.”

“If every course was as value adding and effective as this one the share price would be £20.”

“The pre-dinner speakers were hugely impressive. Content was excellent, and to have assembled such eminent people really underlined the feeling of self worth in being on the course.”

“This programme looked at my identified problem areas and offered real solutions.”

“An honour and privilege to be included!”

“Penny has really dropped as to why things have happened as they have in the past.”